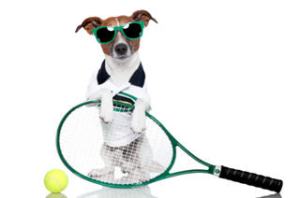 In my endless effort to find something I am good at and enjoy doing, I signed up for eight weeks of adult group tennis lessons. I am not particularly athletic or graceful so I struggle to find activities that provide exercise without making me miserable, or boring me to death. The class started out well and I was having a great time. I completely didn’t care that I was obviously the worst in the class and I thought for a minute that this might be my new “thing.” Ever since my husband passed away, giving me evenings to fill, I have been searching for a “thing.” Then the class warm-up ended and we began exercises that pitted us against each other. That is when I noticed the uptight, aggressive women in their little tennis skirts who were out for blood.

You know who I’m talking about. There is one in every exercise class. It’s the woman who is bouncing up and down, flailing her arms around when the aerobics instructor says to march in place. It’s the girl in boot camp who is running two inches behind you because you are not running fast enough; the woman in circuit training who has her treadmill on an elevation of 14 and is climbing to the clouds while the rest of us are struggling to put one foot in front of the other. I can’t stand those people. Seriously, I quit Zumba because of those people.

So now I found myself in a tennis class full of women who were confusing a recreational adult education class with Wimbledon. They bounced up and down while waiting for the ball like they saw the Williams sisters do, and then slammed it in my face. Until this point, my tennis career had consisted of friendly meet-ups with my work friends who are as athletically challenged as I am. We are pleased with ourselves if we hit the ball directly to each other and cheer if we can keep the ball in play for three hits in a row. If we make anyone actually run for the ball, we apologize. “Sorry! That was out of bounds!” And here was the Mean Girls squad slamming balls down and high-fiving each other. I wanted to cry, but instead I got angry at every shot I missed and kept looking at my watch, waiting for the torture end. Did I mention that this was my first lesson?

When I was a kid, my younger brother and I were home-schooled. To keep us active and interacting with other kids, my parents put us in extra-curricular activities. We did everything from pottery to oil painting, ice skating to tap dancing. They must have spent a fortune keeping us entertained, but they were determined to let us try everything so that we could find our “thing,” that one passion we could be really good at. I’m obviously still looking. My brother was an art major and elected the Student Body President at a top 25 university. In high school he played basketball, volleyball and football, and got up at 5 a.m. every day to practice with his swim team. So you can imagine how obnoxious I thought he was when he was twelve and I was fourteen and we were taking our home-school lessons. He had a competitive side that made him successful at everything and made me want to smack him. I was born without the competitive gene. When we started a new class together, like horseback riding, my little brother would outshine me and I would instantly lose interest. That is how he ended up the captain of the university polo team and I became a writer.

Ever since my alarming tennis experience I have been thinking about my childhood and how different my brother and I turned out. We were raised the same way but developed very differently. Do your parents have any control over your competitive nature, or are you born with it? Does nature decide how much you want to beat that stranger on the other side of the net, or can a softer competitive attitude be nurtured? Should it be? You have to compete to be successful in this survival-of-the-fittest world. How do you teach a child to be competitive, but not too competitive? The great philosopher Dr. Phil once said, “Make sure your kids know that you are proud of them for playing the game and trying hard, and that they don’t always need to win. Also make sure your children are proud of themselves from the inside out, and that they don’t always need someone to validate them.” That is great advice but sounds a lot easier said than done.  How do you teach a kid to excel at soccer but then convince them that they don’t need to win?  It’s a tough job.

After my disastrous tennis class, I decided to try a different night to see if the people were nicer and more my speed. I walked onto the court during warm ups and surveyed the scene. A man standing in front of me “passed wind” for a good 15 seconds. A mentally-challenged boy was trying to take out a bush with his racquet.  An elderly Korean woman tripped over her own feet and fell down on the court. The next hour was fun and happy and I loved it. I had finally found my place in the tennis world and I actually learned something. I realize not everyone is as completely devoid of a competitive nature as I have become, but I wish people would give it some thought before they slam a ball in the face of some complete stranger who is just trying to have fun and avoid another night in front of the TV, missing her husband.